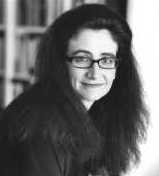 Jacqueline Carey is the author of The Crossley Baby and other New York Times notable novels.

Short stories from her collection Good Gossip first appeared in The New Yorker Magazine. She has reviewed books for the New York Times, and she had a mystery column at Salon.com.

After moving between New York City and Montana a couple of times, she now lives in Montclair, New Jersey. Her husband, Ian Frazier, and their children, Cora Frazier and Thomas Carey Frazier, are all writers.

I spend a lot of time thinking and writing about climate change. These mystery stories are not science fiction. They are tomorrow's realism.

We Frequent the Moon Bar (Alfred Hitchcock, July/August 2017) takes place when Ofc. Hector George has just started the job. He tells Det. Eureka Kilburn that he met a woman in the Moon Bar, an electricity-less new "hot" spot open only when the moon is out. She is on the run, and Hector wants Eureka to help her. You will find the story on this site.

In We Are Trapped at the Morgue (Alfred Hitchcock, Jan/Feb 2017) Det. Eureka Kilburn wakes up unable to move. What happened? And worse, what is about to happen?

Det. Kilburn's visit to the half-abandoned MacDill Air Force Base exposes an unusual family secret in We Walk on Top of Guns (Alfred Hitchcock, April 2016).

In Death at High Tide (Artenol, Winter 2016), Det. Kilburn discovers an apparent suicide in a landmark building, and the reader is challenged to figure out what is wrong with the scene.

In We Are Caught in a Net (Alfred Hitchcock, Jan/Feb 2016) Det. Kilburn kayaks out to a flooded Longboat Key, where she finds an old bone, a "ghost net," and a diver someone tried to cut out of her wetsuit.

We Are All Accomplices (Alfred Hitchcock, April 2015) features a teenage Eureka, still living in Miami, who meets a cop as they both watch furniture sailing away in a flood. Then the convenience store at which she works is robbed.

In We Are Not Insured Against Murder (Alfred Hitchcock, December 2014), a life insurance salesman come to town at a time when death lies around every corner. Det. Kilburn wonders why.

In We Don't Trust the Night (Alfred Hitchcock, July/August 2014), a young girl is traumatized when she tries to fetch water from an urban spring and instead witnesses a particularly vicious beating. Years later, she claims she has seen the perpetrator again.

We Hate the Taste of Jellyfish (Sherlock Holmes, March/April 2014) begins with a fortune teller predicting a suitor's death as the people of Sarasota net jellyfish for dinner on a now submerged Bayfront Drive. Curiously, the man really does die a few days later.

We're Upside Down and Inside Out (Sherlock Holmes, July/Aug 2013) features a post-hurricane landscape in which roofs, cars, and the innocent and the guilty have all been turned topsy-turvy.

In We Don't Call It Stolen Property (Alfred Hitchcock, Jan/Feb 2013) Sarasota's housing market has collapsed. You can't say the homes have any real monetary value at all. One bungalow, however, is always kept ready for buyers who never come. Then a few odd objects go missing, and a severed toe is found.

As the cover of Alfred Hitchcock Mystery Magazine put it, Det. Eureka Kilburn is keeping the peace in torrid times.

I bet there are not many of us who have published stories in both The New Yorker and Alfred Hitchcock.

The husband of an avid mystery reader is arrested for accounting fraud in this tale of corporate culture run amok.

Two sisters each want to adopt their niece. But who will be the better mother-- the high-powered executive or the stay-at-home mom?

The Other Family
Abandoned by her mother in the flower power sixties, a sharp-eyed teenager watches another, apparently perfect family break up.
Good Gossip

Twelve interlocked stories set among a small circle of friends in New York City begin and end with weddings.